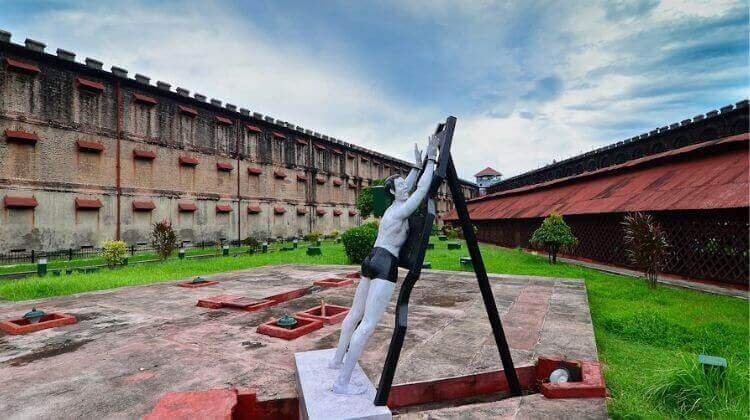 ‘Kal’ is a Sanskrit word that means time or demise, while ‘Pani’ implies water. The name, Kala Pani came into existence during the colonial period. The British government sent prisoners to Andaman and they never returned.

The “Kala Pani” (Black Water) seems like a word associated with paranormal exercises in the line of Black Magic. Be that as it may, it has witnessed some of the most obscure and horrifying episodes of the British brutalities in provincial India[1]. There are various stories about Kalapani. Many of them are related with the life of a brave soul “Veer Savarkar“. Nonetheless, there were many freedom fighters who lived with the darkness and suffering of the Kalapani for a long time.

Kalapani was a British Penal Settlement located in the middle of a sea. It was miles away from the territory of India, on an island of Andaman and Nicobar. The punishment given to the political figures during their struggle of India’s independence was the most painful. It was maybe severe than capital punishments.

Life of Prisoners in the Jail:

The Britishers treated the detainees with utmost brutality and fierceness. There were neither toilets nor lights. They used to get two earthen pots; one used for consuming food items and the second used as toilet, which needed to be washed every day[2].

There were different battles to get by in those brutal and inhumane conditions. Getting stung by the scorpions was a typical undertaking as there were no lights. Additionally, since no legitimate treatment was accessible, many died because of the fever brought about by the scorpion stings.

The government treated prisoners like slaves and exposed them to merciless punishments. Further, the authorities gave them food unfit for human consumption. More often than not, worms were found between the bits of the bread and wild grass were additionally boiled and served instead of the vegetables[3]. Along with the work related to roads and building developments, the prisoners were also used in rope making and oil extraction firms.

Escapades and Fate of Political Prisoners:

Once, several prisoners made one good escape, but were caught since it was practically toilsome to cross the sea[4]. Consequently, the British recaptured them. One committed suicide, while the rest of them were hanged till death.

Political prisoners were kept isolated till their spirits shattered. They were let out of the cells once in a while. Be that as it may, if the individual needed to step out for urination, they needed to bow before the superintendent or hold it back till he let them out the next morning[5].

Some famous fighters who faced brutality in the Kalapani were Veer Savarkar, Mahavir Singh, Sushil Kumar Dasgupta. Mahavir Singh kicked the bucket in the prison cell while confronting the pitilessness by the British Government.

British also became the prisoners at their self-made prisons, when Japanese forces invaded and captured the island from 1942 to 1945[6]. Subhash Chandra Bose also visited this prison during the Japanese invasion and assumed control of the whole island. However, the actual power vested in the hands of the Japanese. They also tortured the Indian Prisoners. In fact, they shot 44 Indian Civilians because of suspicion of spying. However, after World War II, the British regained the control of the island.

International human rights laws shield individuals from racial separation, from torture and from authorized vanishings[7]. Kalapani violated each and every right of the prisoners which was provided in the United Nations Human Rights by the UN General Assembly. The UN charter consists of several rights for the protection of human beings, it also consists rights for different categories one of which is the Rights of Prisoners[8]. Some of the rights are as follows: –

1. All prisoners shall be treated with the respect due to their inherent dignity and value as human beings.

2. There shall be no discrimination on the grounds of race, colour, sex, language, religion, political or other opinion, national or social origin, property, birth or other status.

3. It is, however, desirable to respect the religious beliefs and cultural precepts of the group to which prisoners belong, whenever local conditions so require.

4. All prisoners shall have the right to take part in cultural activities and education aimed at the full development of the human personality.

5. Efforts addressed to the abolition of solitary confinement as a punishment, or to the restriction of its use, should be undertaken and encouraged.

6. Conditions shall be created enabling prisoners to undertake meaningful remunerated employment which will facilitate their reintegration into the country’s labour market and permit them to contribute to their own financial support and to that of their families.

7. Prisoners shall have access to the health services available in the country without discrimination on the grounds of their legal situation.

8. With the participation and help of the community and social institutions, and with due regard to the interests of victims, favourable conditions shall be created for the reintegration of the ex-prisoner into society under the best possible conditions.

Kalapani is presently considered a national memorial as declared by the then PM Morarji Desai on February 11, 1979[9]. Today it remains as the testimony of barbarous persecution of the political prisoners and political dissidents of British India.

Two out of seven wings were shattered by tremors and subsequently, two other wings were decimated during World War II. Thus, just three wings are unblemished there[10]. Out of these three wings, back of one wing and front of two wings are accessible to the general population.

While leaving India after its independence, the British wanted to make a separate nation on the Andaman Islands. But the arrangement couldn’t become a reality and the Andaman and Nicobar Islands turned into an indispensable part of India.

The Indian Government declared this jail as a National Monument and turned it into a tourist attraction in the region. A major part of this prison has been converted to a clinic, where treatments are free. In the primary complex, the life of the detainees and their hard work is shown through the clay models.

[6] Al Arafat Sherfuddeen, Kala Pani Jail (Andaman) – Where Hundreds Who Revolted in 1857 Were Sent to This Jail, THE LOGICAL INDIAN, (17th February, 2021, 11:30 AM) URL: https://thelogicalindian.com/rewind/kala-pani-jail-andaman-when-hundreds-who-revolted-in-1857-were-sent-to-this-jail/

[7] International Convention on the Elimination of All Forms of Racial Discrimination, UNITED NATIONS OF HUMAN RIGHTS, (17th February, 2021, 11:40 AM) URL: https://www.ohchr.org/en/professionalinterest/pages/cerd.aspx

Civil Rights
12 months ago
287
0
Exploitation in Constitution: Article 23 and 24