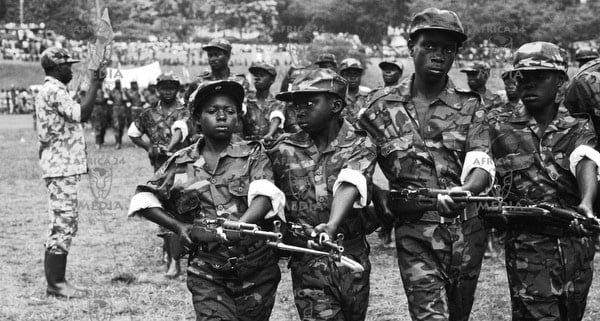 Child soldiers are children (individuals under the age of 18) who are used for military purposes.[1] According to the UNCRC and international human rights law, no child under 18 may be recruited into armed forces (government military) or armed rebel groups (militias and gangs). However, the participation of children as soldiers is a disturbing truth.

Lately, the intentional recruitment of children in combats is on the increase. This issue is not, however, a new one. In the international community, both the government as well as opposition groups of many states vigorously recruit children to serve in their armies.

One such State is Sierra Leone. This article discusses some lesser-known civil rights violations endured by the child soldiers.

Sierra Leone is a small country on the West-African coast. It is a country with only 7.9 million people.[2] Further, the country is culturally diverse, with people who are very strong physically.[3]

Further, young girls became sex slaves. Other children were raped, and had their limbs amputated. The employers injured, displaced, and tortured many others.[4]

Child soldiers live in situations that are the direct inverse from a typical child’s living condition. Being a child soldier contorts a child’s view. As a result, their assumptions regarding everything change. Further, numerous child soldiers battle with connections and trust.

The State conveniently ignores the human rights of these children. Often, against their will, they have to fight on the front lines. Not only this, but they also have to carry out incredibly dangerous tasks in conflicts they do not understand. As a result, these children endure the violation of their rights on many fronts.

Right to Live in a Civilized Society:

A civilized society or country is one that has a well-developed system of government, culture, and way of life and that treats people who live there fairly.[5] The conditions at the military camps are not sanitary. Most kids do not receive any sort of medical attention. Not only are these places not civilized, but they are hardly a society at all.

RUF set up “Bush Camps” in the wilderness, away from society. Thus, it made the living conditions even worse than they already were. Consequently, the child soldiers did not understand the meaning, structure or existence of a civilised society. Further, the conditions made it difficult for them to even distinguish the right from wrong.

Freedom of Opinion and Expression:

To add more, in the camps, no one paid attention to the thoughts of the child soldiers. They had no say in anything. They could not complain if they suffered injuries, for employers would punish them. Thus, the child soldiers had no freedom of opinion or basic expression in the camps. This is also a principal reason why the children did not know how to express themselves after the war ended. As an obvious consequence, they had minimal social skills.

Right to Participate in Culture:

Sierra Leone had a very diverse culture until the war came. It separated many people, and in some places, culture was forgotten, including in the camps. The child soldiers had no sense of culture in the camps, which had no sense of fun or religion. Even if the camps did participate in cultural activities, they would not include the child soldiers. Thus, it not only constituted a grave violation of children’s rights but also resulted in the deprivation of a wholesome childhood.

Right against Torture and Cruelty:

Another violated human right was the Right against Torture and Cruelty. In these camps, it was cruel for the leaders to put such young children in a position that put their lives in danger. Further, they used the other children cruelly as labourers for the camps. Apart from this, young girls were used in the “bush camps” as sex slaves. This is an obvious form of torture.

RUF leaders even brainwashed some children to kill their own families, burn and even loot their house. Other forms of torture that the war children had to endure included abduction, rape, amputation, mutilation, and displacement. One can safely state that all these things violate one or more human rights.

The young country of Sierra Leone is mostly made up of children, around 7000 of whom are still child soldiers. Every human in the world deserves to have rights. However, unfortunately, the child soldiers of Sierra Leone were denied these rights. Due to the inhumane acts of the government, and the RUF, children lost their childhood.

These children are still recovering today from injuries, PTSD, and various other things that could have been avoided by the evasion of a horrible war. If the child soldiers are given their due, it might be easier for them to forget their tough times.