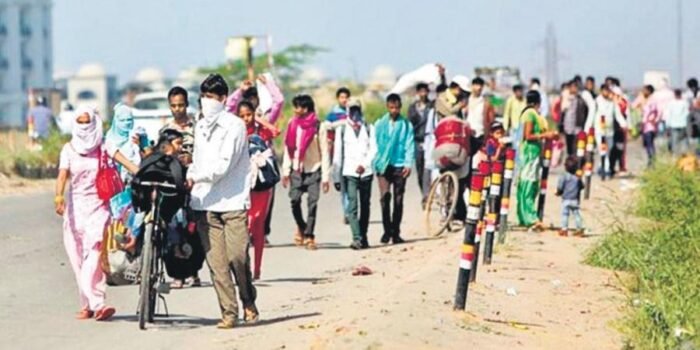 Human rights are moral principles and are regularly protected as legal rights. “to which a person is inherently entitled simply because she or he is a human being”.[1] Human rights in India are provided to the Citizens in the form of ‘Magna Carta’, that is, Part III of the Indian Constitution. Chief Justice Subba Rao in Golak Nath v. State of Punjab[2] had rightly observed, “Fundamental rights are the modern name for what has been traditionally known as natural rights”.

The Covid-19 pandemic has created a type of house arrest situation in the whole world due to which, separation, social removing, distancing have become watchwords. An idleness situation exists now with the dropped carrier, transport, and train administrations. Notably, a similar system has created an extraordinary versatility in countries like India, especially in urban areas like New Delhi.

There was an unexpected burden of the lockdown planned for capturing the spread of the novel coronavirus. The possibilities of acquiring a business in urban communities and urban regions evaporated. Consequently, India stood observer to a mass migration of migrant workers towards the finish of March.

Reports of migrant workers walking long distances to go to their hometowns as the lockdown has been imposed by the government, from cities like New-Delhi, etc have appeared in the newspapers[3].

Situation and Distress Caused to our Migrant Labourers:

Different news channels interviewed migrant workers. All of them ultimately were only worried about their survival as they were not able to earn their daily wages. As a result of this, the migrant workers worried that there will be no food. The lifestyle that the migrant labourers had to adopt during lockdown violates human rights because of the way the lockdown was imposed by the government.

The government is supposed to act in certain ways or to refrain from certain acts to protect the human rights and fundamental freedoms of individual or groups. However, while tackling the virus, the Indian government completely ignored the migrant labourers.

The massive human rights violations sustained by these people because of the ignorance shown towards them from the government’s end are discussed ahead in this article.

Article 3 of the Universal Declaration of Human Rights (UDHR) and Article 21 of the Indian Constitution states that, “No person shall be deprived of his life or personal liberty except according to the procedure established by law.”

The state cannot be defined in a restricted sense, it includes government departments, legislature, administration, local authorities exercising statuary powers. The migrants are the responsibility of the government after lockdown is imposed. Unfortunately, it has an irresponsible approach towards the matter, and the poor labourers are left to survive on their own accord without adequate arrangements for food and shelter.[4]

In violation of Article 19 of UDHR and Article 19(1)(a) of the Indian Constitution, the poor labourers were not heard for a long time as they were ignored efficiently by the government. To add to their misery, the judiciary of our country also denied to help them. In a petition filed by Alakh Alok Srivastava, the court shrugged off its responsibilities by simply passing them on to the government in an order clarifying that the State has to take the call regarding providing transport facilities to the migrant labourers.[5]

In violation of Article 13(1) of UDHR and Article 19(1)(d) of the Indian Constitution, the migrants were not allowed to move or plan a journey to their hometowns. Even when they tried to walk back to their homes, they were stopped by the police because of the lockdown[6]. Not only that, but they were also greeted with brutal and even fatal hostilities and were actively prevented from moving around.

Article 22 of Universal Declaration of Human Rights and Article 29(1) of Indian Constitution states, “Everyone, as a member of society, has the right to social security and is entitled to realization, through national effort and international co-operation and in accordance with the organisation and resources of each state, of the economic, social and cultural rights indispensable for his dignity and the free development of his personality.”

Our government has failed evidently to provide social security to the migrants and has left them starving. The issue of their survival is under a big question mark, let alone their right to have a dignified life and personality development.

These are the four crucial rights of our migrant brothers and sisters that are hindered. I have highlighted these four rights because the migrant labourers would suffer less if these four rights could be guaranteed to them during this time and be enforced by them effectively.

After addressing their problems government took steps by arranging various modes of transportation for them to reach their hometowns. During this period when transport was made available, a very heart-breaking incident occurred near Aurangabad, where some innocent labourers had decided to plan a journey to their hometowns.

They were walking towards the Aurangabad railway station but were exhausted and decided to rest after walking for 36 kilometres. According to local reports, the workers assumed that trains would not be running because of the lockdown, and therefore slept on the tracks. There are images of their food lying on the tracks on social media. 16 deaths of migrant labourers occurred on 8th May 2020 in the incident. Our Honourable Prime Minister conveyed his condolences by tweeting about the sad demise of 16 respected Indian citizens.[7]

“The rights of every man are diminished when the rights of one man are threatened,” rightly said by John F. Kennedy. The Constitution declares India a Sovereign, Socialist, Secular, Democratic Republic, assuring its citizens, equality and liberty, and endeavours to promote fraternity.

As we know, the rights of the migrant labourers are violated and we as the citizen of India need to fix this problem and help these fellow citizens. If we study the situation of these poor migrant labourers, our government has shown utter negligence towards them. The government of India must take this responsibility seriously, without having to wait for tens and hundreds of people to lose their lives in order to garner the attention of the government.

[3] Monobina Gupta, Interview | ‘At the Stroke of Midnight, Migrant Workers Became Aliens in a Double Sense’, The Wire (Apr 23, 2020)https://thewire.in/rights/interview-ranabir-samaddar-migrant-workers-invisible

[4] Chapter III of Human rights in India and Overview