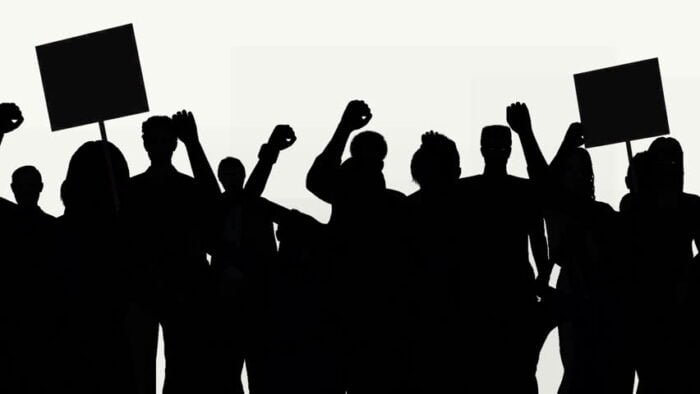 In a democracy where ‘We, the people’ are sovereign, the will of the people is of utmost importance. Demonstrations and protests are a means of direct participation in governance for the people. They are the quickest feedback mechanisms in a democratic setup and a powerful tool of bringing about social change.

In the event of a protest by the citizens against the state, two diametrically opposite groups, both equally powerful, stand with locked horns. Contradictory interests are pitted against each other.

Due to the politicisation of events, protests often turn into a show of power. When the ruling party is unaccommodating of dissent and uses its force to snub people, the force backfires on the oppressors in the form of people taking to streets to make themselves heard.

From December 11, 2019, onwards, the strength of Indian democracy is being tested since the passing of Citizenship Amendment Act, 2019 (CAA).

On one hand, the ruling party in the Parliament had clearly stated in its 2019 Lok Sabha election manifesto about its intentions to deal with the problem of illegal infiltration of migrants in the impugned way.[1] On the other hand, the massive opposition against CAA-NRC by the public reflected non-acceptance.

The protests were largely led by students and garnered massive participation. These demonstrations witnessed outrageous violations of human rights and legal duties.

The Government resorted to undemocratic communication blockades and internet shutdowns in nine out of twenty-eight states, including the national capital, in an attempt to clampdown the uprisings. Tens of people died in clashes with the police, hundreds sustained injuries and many more were detained illegally.

On the other hand, the protestors retaliated against the State’s violence with hooliganism, thus adding to the commotion. Policemen were martyred and injured in the line of their duty. Public property was vandalised and torched. The issue is thus, double-faceted.

With the refusal of the apex court to intervene[1], there existed no supervisory authority amidst this chaos.

The Void to be filled by Lawyers:

The constitutional mandate on the matter is clear. Citizens have a right to demonstrate their disagreement but the protection of Art 19(1) stops guarding them the moment the protest becomes destructive or violent. The conflict arises due to lack of an overseer to sift out the protest that is peaceful from one that is unlawful.

Legal professionals can prove to be instrumental in drawing and maintaining the sanctity of this fine line. The vacuum in the battleground can best be filled by lawyers acting as mediating authorities. A plausible solution is to organise legal practitioners into groups volunteering to facilitate the organisation of protests – right from the first step till the end.

The lawyers can look into obtaining requisite permissions from the local police officials for conducting lawful demonstrations. They can ensure transparency in exchange of information so that the administration can be well prepared for contingencies. These contingencies may be medical, legal or pertaining to public order.

Even if a protest stops being peaceful, the legal rights of the protestors are not automatically terminated. The presence of legal professionals during protests would also ensure that the State does not act arbitrarily. The tendency of State to launch indiscriminate attacks and violate human rights of protestors can be kept under a check.

In a more refined setup, the legal professionals can make the protestors aware of their legal rights as well as explain the gamut of a peaceful protest beforehand. During the demonstration, they can readily provide assistance and legal counsel to the protestors detained by the police. This can go a long way in protecting citizens from undue harassment and custodial violence at the hands of the police.

Attention to Groups with Special Needs:

Lawyers can also ensure that groups that require special protection or possess special rights, for example, persons with disabilities, senior citizens, women, minors etc. are treated as per the special law in their favour. Not only does this strengthen the legal fabric, but also the social fabric by steering not-so-visible sections of the society to the foreground.

On the other hand, the lawyers can assist the police and prove to be instrumental in separating the peaceful protestors from the delinquents and trespassers. The sweeping generalised impression of peace having been disrupted should not be formed due to isolated distress-causing participants. Legal professionals can diffuse tension. A troublesome situation can be prevented from escalating. Thus, the lawyers help in safeguarding both – the public property and the people themselves.

Should the situation still go out of hands, the legal professionals owing to their duty to the court of law, can assist the court in ascertaining the truthful facts. Acting as neutral facilitators between an emotionally charged mob and police, they can be trusted to be in a reliable position to testify without any prejudices. Thus, ushering the legal professionals into the current apparatus of protests can bring in the much-needed stability in a workable and economic manner.

In the event of a protest turning violent, does the ruling government get a free hand to abuse the fundamental rights of citizens unabated? Do the citizens get a free hand to go on vandalizing the public property, causing huge losses to the tax-payer’s money? The answer is no, and no.

The joining link between these two diametrically opposite partakers is the legal expert. The mediating lawyer is the personification of checks and balances in the context of protests and demonstrations. There is a need for organising and mobilising groups of responsible lawyers to achieve a healthy democracy in our country. Legal professionals must rise to the occasion and fill-in the void of regulations so that the democratic ethos of our nation may be upheld.

[1] Satya Prakash, Protests Against CAA: SC refuses to intervene; leaves it to HCs to deal with issue, The Tribune (Dec 17, 2019, 02:24 pm) https://www.tribuneindia.com/news/protests-against-caa-sc-refuses-to-intervene-leaves-it-to-hcs-to-deal-with-issue-13185